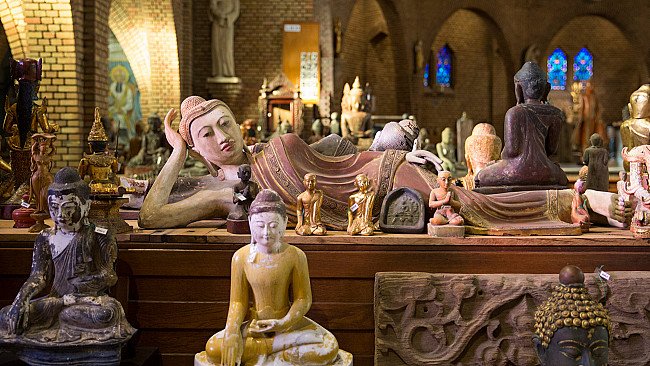 The Buddha, one of the widely renowned spiritual leaders in the world, has been the symbol of peace and the truth behind life and death for many centuries. Even 2500 years after his death, his follow his teachings so as to attain the happiness and find the true meaning of life. His teachings have helped humans to move forward toward the path of the hidden truth behind the inevitable life and death. This level of following has hardly been matched by few leaders and the followers use many forms of symbols and media to pay respect and to be inspired to be like him. One of those media of representing the Buddha and his vast knowledge is Buddha statues. The calm gaze and serene facial expressions of the Buddha statues are considered as the path to solve the mysteries behind inner peace, personal happiness and compassion in one’s life. These iconographic representations have been successful in inspiring many people and spiritual leaders to follow the middle path and non-violence. The statues also represent the Noble Eightfold Path taught by the Buddha and the Four Noble truths on which the principles of Buddhism is based upon. The Buddha statues have different characteristics and styles which symbolize many Buddhist principles and teachings. The foremost example is the hand gestures of Buddha statues, which in Buddhism and Buddhist art principles are known as Buddha statues mudras. Different mudras and gestures in Buddha statues depict different meaning in Buddha statues.

View our collection of Buddha statues

Buy Buddha statues from our gallery

Buy Buddha statues which serve as a very important reminder to carry on your spiritual practice. The Buddha statues for sale in our gallery are directly imported from Southeast Asian countries like Burma, Thailand, Vietnam, Laos, etc. Our frequent visits in these countries i.e. every few months in a year, we have been able to develop and maintain special relationships with many Buddhist monasteries, temples, personal collectors and Buddhist art dealers who are willing to part their special rare and antique Buddha statues, which we later import in our Buddha statues gallery in the Netherlands. Therefore, there may be little or no doubts over the authenticity and legality while you buy Buddha statue from us as we do not have any policy of dealing with stolen statues. We disregard the stolen statues as the theft of such important piece of art and history will just undermine the story behind them.

We are proud to have the largest collection of rare, antique and Original Buddhas all the way from Burma and other Southeast Asian countries. Buy Buddha statues from our online Buddha statues gallery by choosing the best suitable statue for you and your loved ones.