While a myriad of Buddhas have existed throughout the eons and a myriad more to come, it is the historical Buddha, Shakyamuni (sage of the Shakya clan), son of Suddhodhana and queen Maya, whose story has been subject of the most retellings and depictions. His birth (traditionally 563-483 CE, though many scholars currently feel it may be a century later) in the remote kingdom of Lumbini, Kapilvastu, Nepal, was the result of immaculate conception; Maya dreamed that a white elephant entered her side, impregnating her. 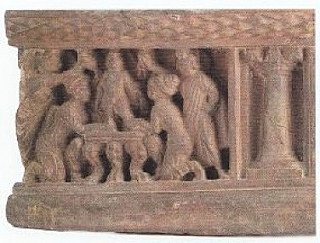 As the end of the ten-month pregnancy drew near, Maya set off to her family home to give birth but stopped over in Lumbini Park, where the child was born. As her sister looked on, Maya grasped a sala tree’s branch and watched placidly as the baby emerged from her right side. (It is a common Indian belief that babies in the womb recall their previous lives but forget them when forced out of the birth canal, so it was necessary for the Buddha to be born in this manner.) The gods of the four quarters received him, bathed him and heard him make is first pronouncement.

As he took his first seven steps, he announced that this would be his last birth, for he had lived countless virtuous lives before acquiring enough merit to pass on to nirvana. Five hundred forty-seven versions of these lives (jatakas) are found in the Pali canon, though the number of jataka tales varies in different traditions. Maya returned home with her son, who was named Siddhartha (“he who achieves his purpose”) Gautama. There the family consulted the seer Asita, who fortold that the baby would be a cakravartin (one who turns the wheel of the law), a universal monarch in either a secular or a religious sense. Asita based his prophecy on astrological considerations and the thirty-two major and eighty minor signs marking the baby’s body; some of these marks would become identifying features in the images of the Buddha. 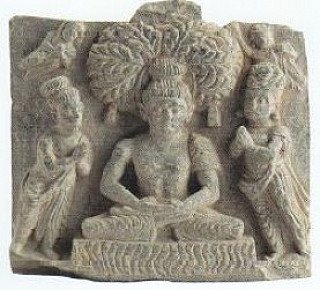 Since Asita had predicted that Siddhartha would be a rule in either the secular or the religious realm, the baby’s father, anxious to ensure that his heir would become a temporal monarch, arranged for the young man to live his life protected within the palace walls. Surrounded by the accountrements of a sumptuous existence, and learning to excel in the arts, sciences, and sports, Siddhartha passed his days passed his days peacefully and happily. Well educated and wanting for nothing, he married and felt content in the knowledge that he would one day become king. 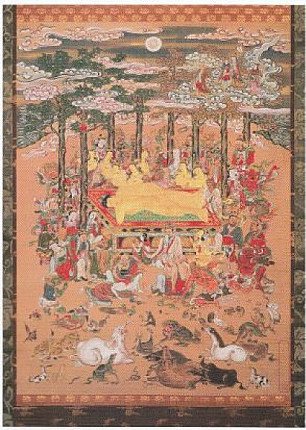 Now repulsed by the opulence of his life, Siddhartha resolved to leave the palace; when he departed in the middle of the night, the gods muffled the sound of his horse’s hooves. Once he had achieved some distance from the palace, he turned his faithful horse, Kanthaka, over to his groom, Chandaka, and in a further act of renunciation he cut his hair and gave is fine clothing to a passing huntsman.

For the next six years, he followed a course of extreme asceticism, but he became aware that physical austerities alone would not bring spiritual lieration. He began to meditate beneath a pipal tree in Bodh Gaya (“place of enlightenment”) In the course of Siddhartha’s meditations, Mara, the god of illusion attempted to deter him with a host of demonic beings and Mara’s three seductive daughters. But Siddhartha remained intent and achieved enlightenment. He then spent another seven weeks in Bodh Gaya before setting forth. During one of these weeks, he was protected from a great storm by a naga (snake). At another point during the seven weeks, the god Brahma entreated him to teach others to follow the Middle Way, a harmonious and balanced path that avoids extremes.

The Buddha taught his first sermon at Sarnath, explaining the dharma  (law or way), which involved freeing oneself from samsara (the cycle of rebirth), a cycle perpetuated by one’s karma (actions). He went on to perform the miracle of multiplication at Shravasti, just one among many miracles that he performed during his lifetime. The Buddha foretold that he would die at eighty, in Kushinagara, after roaming northeast India for forty-five years teaching the path to end suffering. Throughout his life, he was a teacher.

The basis of his teachings was the Four Noble Truths; all existence is suffering; the cause of suffering is desire; to renounce desire is to renounce suffering; one can achieve this by following the Noble Eightfold Path. This path includes right view, right thought, right speech, right action, right livelihood, right effort, right mindfulness and right concentration.

View all of our Latest Buddha Statues For Sale