Temple of the Sacred Tooth Relic

Temple of the Sacred Tooth Relic is an ancient Buddhist temple located in the royal palace complex of the former Kingdom of Kandy, Sri Lanka. Since the temple in Kandy region, it is listed as a World Heritage site.

Like other Buddhist temples, this temple also observes the daily worship. Normally, Bhikkhus of the two chapters of Malwatte and Asgiriya conduct these worship in the inner chamber of the temple. 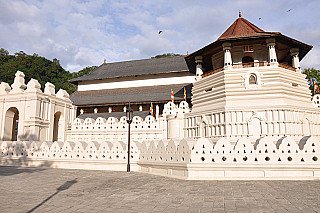 The history of the sacred tooth is very interesting. Since it is perceived as the good fortune most of the people desired the relic. It is recorded that after the Buddha achieved parinirvana, the tooth relic was preserved in Kalinga. Later it was smuggled to the island, Lankapattana, by Princess Hemamali and her husband, Prince Dantha. As they landed on the island, they handed over the tooth to the king, Sirimeghavanna of Anuradhapura. The King then enshrined the sacred tooth in the Meghagiri Vihara in Anuradhapura. The monarch had the sole responsibility of the relic. Therefore over the years, the custodianship of the relic symbolized the right person to rule the region. Hence, it resulted in the building of the temple housing tooth relic near to the royal residences. This act was clearly recorded during the era of the Anuradhapura Kingdom, Kingdom of Polonnaruwa, and the Kingdom of Dambadeniya and also later regimes.

It is recorded that the relic was kept hidden in Delgamuwa Vihara during the reign of Dharmapala of Kotte. It was Hiripitiye Diyawadana Rala and Devanagala Rathnalankara Thera, who brought the relic to Kandy. King Vimaladharmasuriya I built a two-story building to house the tooth relic. The tooth relic didn't remain here for the long period as the Portuguese invaded Kandy in 1603. The relic was transferred to Meda Mahanuwara in Dumbara. In the time of Rajasinha II, it was recovered again. He built a new temple with the purpose to house the tooth relic.

But the present day temple of the tooth was built by Vira Narendra Sinha. The temple complex has beautifully constructed Paththirippuwa which was originally used by the king for recreational activities but was later offered to the temple. At present day, this building is used as the temple's library.

View our collection of temples and shrines in our catalog

Architectural features of the temple

There runs the moat just outside of the perimeter of the temple. The wall that separate the moat and Bogambara lake is known as water waves wall. It is found that the walls have a holes in which coconut oil lamps were placed. over the moat, there is the main entrance gate which is called as Mahawahalkada. At the foot of Mahawahalkada  steps, there is a Sandakada pahana (moonstone) which is carved in Kandyan architectural style. It is recorded that in 1998 bomb blast, Mahawahalkada was totally destroyed. It was rebuilt afterward and also other architectural features mainly stone carvings were added during this renovation project. Elephants are depicted in stone on either side of the entrance. On the top of the staircase, a Makara Toran and two guardian stones are placed.

In 1987 Prime Minister Ranasinghe Premadasa built the golden canopy over the main shrine. During this addition, the golden fence was also added which encircles the main shrine. The golden casket which has the shape of a stupa houses the tooth relic is also engraved with precious gemstones. The chamber also displays the procession casket which is used during the Kandy Esala Perahera.

Note: Apart from maintaining the blog on Buddhism, we also manage huge collection of various period and regional Buddhist arts, Buddha statues, and artifacts. Please feel free to visit our online Buddha statues gallery to know more about the Buddha statues for sale.