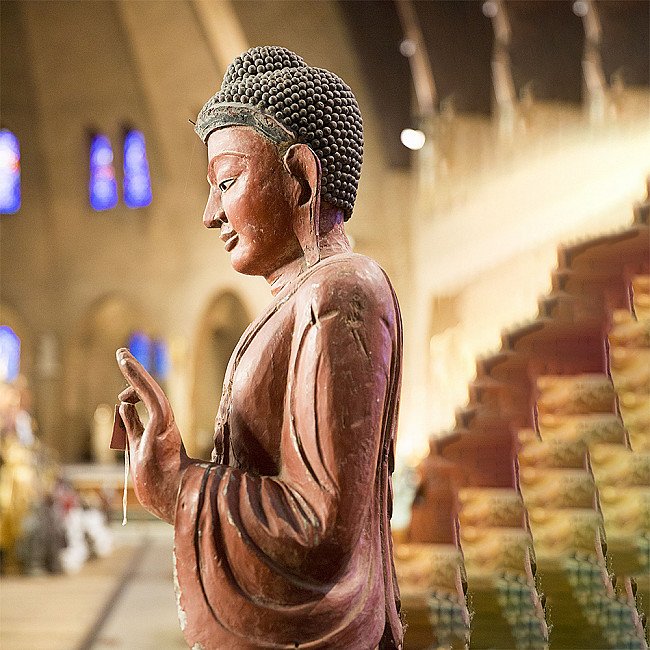 Prior to the existence of Buddha statues, people used to worships Bodhi leaves or the water or soil from the pilgrimage sites. After this some of the objects which were highly regarded, such as the Lotus emblem as purity, a elephant vision which had occurred in Gautamas mothers dream, pagoda etc were worshipped as the image of Buddha. Meanwhile, due to the influence of Buddhism, King Ashoka built the pillars with Buddhist manuscripts to symbolize Buddha. Later, during the reign of Greek King 'Alexander The Great' had swarmed and governed into the Takshyashila city within the country Gandhara, who in coordination with the community built the first Buddha statue for the sake of preserving cultures. The study of Buddhismand devotion towards Buddha has inspired artist to contribute for building Large Buddha statues which are incredible. The existing world largest Buddha statue is the Spring Temple Buddha depicting Vairocana Buddha, one of the Pancha Buddhas is situated in China which is 128m high built in 2002. It consists of a 20m lotus throne placed on a 20m pedestal accumulating to the total height of monument 153m. The whole statue is made from copper.

The resplendent glory of Buddha and the achievement of nirvana have played a vital role for carving such a historical commemoration. This large Buddha statue serves a country pride. However, Buddha is an absolute awakened one, who has awakened from the sleep of ignorance and has a crystal visual about the facts of life. Buddha doesn’t solely signify the God; it is the state of your thoughts which can born more Buddhas in the future. There is not any aspect of life and knowledge that Buddha doesn’t know. He can answer to all the dilemmas of yours. He is the Supreme Being. The meanings of Buddha statues are different to different people, though any idea of keeping antique Buddha statues at home, garden or building a park with it is commendable. The aesthetic large garden Buddha statues are very adorable for your home to stream yourself with peace and serenity. The process of building of such a historic shrine will pass from generations to generation until and unless the teachings of Buddha keep on inspiring people. The basic need of human being will always be the wish for living a happy and no any suffering life. Having said that, the large outdoor Buddha statues in our gallery can be a delineation of Buddha showering you with the blessings. So, where will you find great sitting Buddha statues for you outdoor or for some larger spaces.

Large Buddha Statues in our Gallery

With the largest collection of Large Buddha statues for sale, our Buddha gallery in the Netherlands holds the variety of Buddha statues which include safe travelling Buddha, long life Buddha, spiritual journey Buddha, earth Buddha, reclining Buddha and the earth Buddha. We have been able to collect these statues from various countries in the Southeast Asian region especially from the Buddhist temples and monasteries from Burma which carry historical importance. Similarly, we have been able to collect various Buddhist arts from the artisans who are well devoted towards buddhism. As we travel to these region semi annually, we have been able to collect these rare artifacts which do not only mean the physical representation of the buddha but they depict the peaceful and untroubled life. We want our customers to trust in the genuineness of the antique Large Buddha statues in our collection as we do not have any policy of dealing with stolen statues. If you want to purchase any one of the antique Large Buddha statues, then visit our Buddha gallery in the Netherlads or you can visit our online Buddha statues gallery.